From Cuphead Wiki
Jump to: navigation, search
This article is a stub. You can help Cuphead Wiki by expanding it. 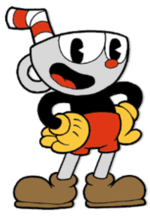 Cuphead is the protagonist and stars as one of 2 playable characters of Cuphead.

Cuphead, along with Mugman, is a character who made a bet with the devil - and lost. Because of this, Cuphead is now required to traverse a variety of worlds to do the devil's bidding.

Once upon a time there were two brothers, Cuphead and Mugman, who lived in a magical place called the Inkwell Isle. They both lived carefree lives under the watchful eye of their grandpa, the wise Elder Kettle. Eventually, the two boys wandered too far from home. Even though Elder Kettle warned them multiple times to not wander off so far, they ignored their grandpa's warnings and entered the Devil's casino. Once inside, it was not long before Cuphead and Mugman found themselves on a hot streak with King Dice exclaiming, "These fellas can't lose." The brothers heard someone say "Nice run boys," shocked as the newcomer who said it was the Devil himself, who owns the Casino. "How about we raise the stakes?", he proposed with an evil grin. If the brothers could win one more roll, as per the bet, they would win all the Devil's loot and the Devil's casino itself would be Cuphead and Mugman's to own. However, if they lost, the Devil got to keep their souls! The Devil made this bet with loaded die in his hand. Cuphead was blinded by the easy riches and quickly agreed, grabbing the dice to throw. As Cuphead gestured to roll, Mugman cried, "Good gosh, Cuphead, no!", for Mugman knew it was a bad deal. But he cried too late; Cuphead rolled snake eyes! The Devil, laughing, slammed the floor, and yelled, "You lose!" The brothers trembled in fear as he loomed over them. They begged for their lives. "There must be another way to repay you," Mugman cried. "Yes, please mister!" Cuphead added. The Devil snickered. "Perhaps there is," he replied, pulling out a piece off parchment. "I have a here list of runaway debtors. Collect their souls for me, and I might pardon you mugs.", he said. "Now get going!" roared the Devil as he most rudely kicked the boys. "You have 'til midnight tomorrow to collect every soul! Otherwise, I'm collecting yours!" Cuphead and Mugman, terribly frightened, ran away as fast as they could. "C'mon Mug!" hollered Cuphead. "We have to find the Elder Kettle. He will know what to do!" And so the elder told them to prepare for a scrap and sent them off to do the Devil's bidding...

Cuphead's body is pure white. He wears brown shoes, red shorts, and a black shirt. He has a small red nose, and appears to almost always have a smile. He has a handle on the back of his head. His gloves appear both yellow (during the results screen at the end of defeating a boss) and white (when in a level). In his head is white liquid, and a bended white-and-red-striped straw.