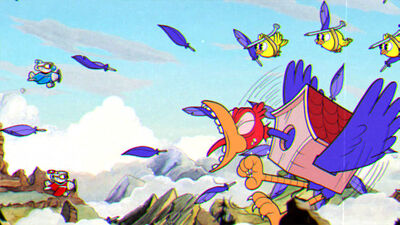 There are a few unique Super Moves in Cuphead which can seriously change the way you play through each world.

Realese a powerful horizontal beam in the direction you are facing.

After beating the first side scroller mission Cuphead unlocks a bridge leading to Mausoleum I. If Cuphead talks to the fish before he goes into the mausoleum, she says she is going to hit Cuphead with the "ol' parry move" because "that's how you deal with ghosts round here," and "only nitwits try to shoot ghosts." When Cuphead enters the Mausoleum, there is an urn in the center of the room saying, "help me!" Waves of pink ghosts that must be parried to kill will appear. When Cuphead has dealt with them, the urn opens and a golden floating cup appears. She thanks Cuphead and introduces herself as the Legendary Chalice, and explains her quest for magic, and how those ghosts imprisoned her. The Legendary Chalice gifts our hero with a new ability. However, before she gives it to Cuphead, she mentions two other mausoleums. After the scene, Cuphead returns to the main map and the first super move is unlocked.

Become invurnable of a short time.

In inkwell isle II, cuphead can go into the mausoleum and fight ghost, just like the first mausoleum but the ghosts are a bit harder. Once you clear the mausoleum you meet Legendary Chalice and she will give cuphead the new super.

Maneuver your soul and yourself at the same time that you are shooting.

In Inkwell Isle 3 next to Porkrind's Emporium, you can find a mausoleum. In this mausoleum, you do the same thing as the other 2 (Parry Ghosts). You then acquire Super Art 3. With this you can still shoot, but can also maneuver a giant, stronger version of cuphead. When your standing normally, the soul will go straight up and fly off screen. When crouching, he will go straight down. Horizontal movement works the same, he moves where you move. This can be an incredibly usefull Super Art if you know how to use it.